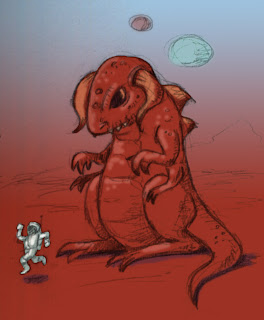 In 2043 is was discovered that Mars was, indeed, inhabited. The massive Marsuk went unnoticed for years due to its low body temperature and almost perfect camouflage. It had never shown on any satellite photos, nor early manned operations.
It is believed that the Marsuk spends alot of its time in hibernation. It was only when a mining operation disturbed their slumber that they appeared. The name Marsuk, comes from the exclamation, "Mars Sucks!" right before a few miners were eaten.
Since then, they have been a constant nuissance, eating anything, or anyone they can find. The larger question, of course, is what has the Marsuk been eating all these years before they had astronauts?
Posted by BaronVonJ at 8:49 AM No comments: 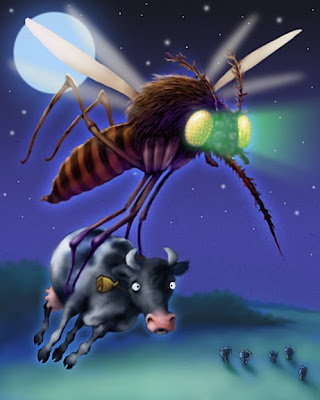 The Morpest is a giant mosquito known in the Entomology community as the "Ginormicus Anopheles Perturbans". The brightly glowing eyes of the Morpest searches the landscape below, and can be seen from great distances in the night sky. As a result, the disappearance of cattle has often been mistakenly attributed to alien abductions. As the name implies, the Morpest is more annoying than your common mosquito. Instead of buzzing in the ear of its next victim, it loudly sings Broadway show tunes and Barry Manilow songs, ad nauseum.
Posted by Warren Ludwig at 8:01 PM No comments: 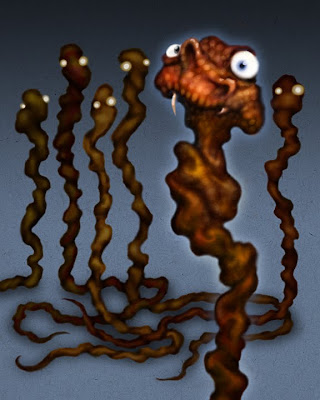 Saint Patrick did not, in fact, drive out all of the snakes in Ireland. The Shileadi still remain, albeit hard to detect. Their distorted form resembles the well-known walking stick known as the "shillelagh". Many people have mistakenly reached for one of the Shileadi, thinking it to be a common tree branch, only to have it escape into the underbrush. Attributing the unusual sighting of a crawling Shileadi to the magic of leprechauns, the snakes are largely unmolested and thrive in the hill country. They are non-poisonous, and keep many farms free of rodents. When rats are not available, they will eat a leprechaun or two.
Posted by Warren Ludwig at 11:10 PM No comments: 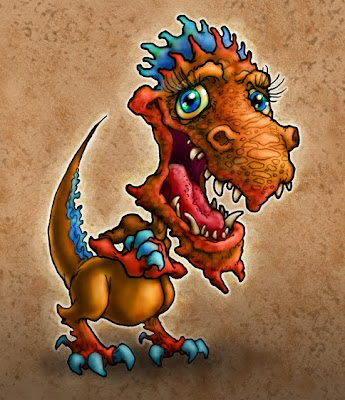 The Alikesor was a unique predator during the Pre-Jurassic era. Standing at a mere 3 ft. tall, the Alikesor would disarm its prey with large, hypnotic eyes. The hapless victim would be lured into a false sense of security by the "I like you...I really, really like you!" expression on the Alikesor's face. Once the soon-to-be-food-source allowed the Alikesor to approach close enough to receive a hug...the animal would quickly discover just how much it was, indeed, LIKED.
Posted by Warren Ludwig at 11:23 PM 3 comments:

The Calmrita, otherwise known as the fireball catfish, is from the Rita genus of fish(catfish)and from the Greek ‘kauma’ or heat. Found in slow moving brackish water, or near the drainage of ruins of heavy effluent or heavy industrial wastes, the Calmrita leads a mostly sedentary life, moving only when necessary for survival, feeding, or mating. At over 16’ long for typical adults, the calmrita is sometimes mistaken for a log or pipe by unlucky survivors of the apocalypse.
It has a slimy catfish like body with a distended stomach and long stinging whiskers and a gaping mouth capable of swallowing a human whole. Its most insidious defensive and digestive attribute is the ability to belch forth the contents of its stomach, covered in a highly toxic and flammable chemical, as a ball of chemical fire, ignited by a super hot gland located along the roof of the calmrita’s mouth. This chemical ball of white hot burning fire is not extinguished by water. The solid nature of the belched mass allows the calmrita to direct its attacks at swimmers, boats, and even those on shore that threaten it or its feeding grounds or breeding grounds.
Because of its natural habitat, often the waters where the clamrita make their home are ignited and burn for days or even weeks. This seems to have little to no effect on the animal or its survival.
Posted by Lead Addict at 2:55 PM No comments: 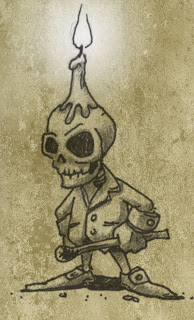 Standing just under 8 inches tall, the Totive is a malign creature, probably of Fae origin. They appear as tiny clothed humans with perpetually lit candles on oversized skull-like heads.
It is thought Totives are the origin of the Willow-the-Wisp stories, as they often lure the uncareful out into swamps and other desolate places. There, they set traps for their victims. The corpses are rendered for their fat, that is used for the Totive's candles. As a result, Totives are foul smelling, solitary creatures.
The first mention of Totives can be found in a manuscript by Brother Oswald, a 13th century monk in northern Germany, called simply: "Nasty Creatures".
Posted by BaronVonJ at 10:18 AM 2 comments: 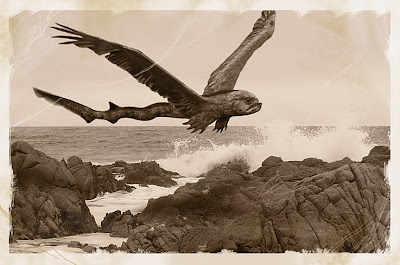 As this newly discovered rare photo reveals, Vairkin were a mutated species of flying fish. Possibly now extinct, evidence indicates that Vairkin once flourished in the Galapagos Islands in great numbers. The eel-like elongated body enhanced their ability to glide through the air, in search of prey. Once a food source was sighted, the Vairkin would tuck in its expansive wings, and plunge into the ocean depths like a torpedo. Huge jaws filled with razor-sharp teeth were capable of hyper-extension, which allowed them to swallow food much larger than their head. Vairkin had rudimentary lungs in addition to gills. Front fins acted as "legs" which allowed them to move about on land, if necessary, to eat the eggs of seagulls or small sea creatures such as crabs.
Posted by Warren Ludwig at 10:28 PM 2 comments:

Hello fellow scholars. This chronicle is dedicated to the cataloging and descibing in words and illustrations the fantasical, magical, disturbing and down right bizarre creatures the good Professor Peak has encountered in his travels through both space and time.

The good Professor's Circle of Scholars shall be documenting those creatures as best we can, to preserve them for scholarship and in hopes that one day, the Professor will take one of us on an Adventure with him! Please Enjoy.